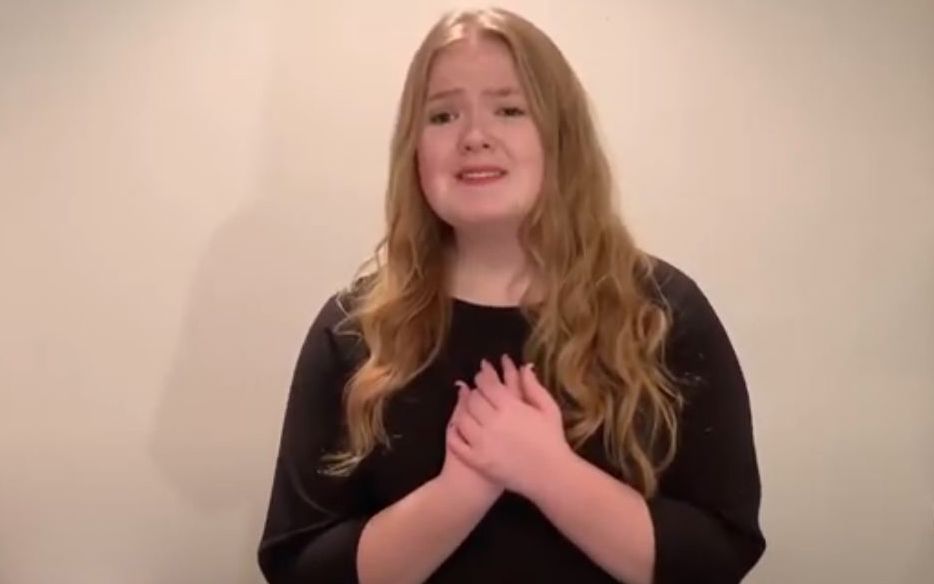 "My experience for this year's festival was not at all what I was expecting," shared Halee Tisler, this year's president of the Drama Club. "Honestly, I didn't have high hopes for this year since we had to go on the virtual format. However, it was so much fun. We were given a lot of opportunities we would have never gotten if we were still in person. For example, we were able to hear from many special guests who are heavily involved in broadway over a Zoom call while they were in their homes in New York."

Fourteen students and two adults, Amy Seaman and Jennifer Ward, attended workshops with theatre and Broadway professionals from all over the country.

Sophia Catella added her experience was incredible for her first Michigan Thespian Festival being new to the Drama Club.

"I was a little bummed that we all couldn't go in person, but it was amazing," she said. "I had kind of high expectations because all of my friends had told me what an incredible experience it was and this year the festival surpassed even my highest expectations."

Catella added it was a lot easier than she expected. She participated in two different workshops in which she sang a song.

"It was a lot less nerve-racking to be singing in my room on camera than it would have been to get in front of people in person and sing," she said. "It was also really nice to be able to go from one workshop to the next by just clicking a Zoom link."

Tisler agreed it was easy.

"We were given a schedule for different workshops and meetings and we were able to log in whenever we wanted," she said. "It was very flexible if I ever needed a break. The Thespys were also a little easier this year because we could take multiple takes of our video to send in if we didn't like the first take, as opposed to doing it live."

Tisler said there were a lot of options for workshops. She participated in a broadway dance workshop, acting, and getting into character workshop, a stage manager workshop, an accents workshop, and a vocal technique workshop.

"There are so many opportunities for all techies, dancers, singers, and actors," she said.

Catella participated in five workshops including a contemporary costuming class where she learned about all the things that you can add to costumes to make them unique.

"I had never considered being involved in costuming before, but the workshop was interesting," she said. "The second workshop I took was 'A Day Of Auditioning In NYC' which was super informative and helpful. Prior to this workshop, I wasn't sure what kinds of things I would need to have ready for auditions and how they usually go, but I feel better prepared now."

Another workshop she took was Embodying Character. Her third workshop was a vocal workshop ran by Katie Travis, who was Christine in "The Phantom of the Opera."

"I got to sing in that workshop because I had emailed a video of myself singing a song for a different workshop run by Broadway's Lauren Molina," she said. "The gentleman I emailed the video to asked me if I would be willing to sing in Katie Travis's workshop, so I signed up for it right away. I sang a song for her, and she gave me feedback on how to improve. It was also super helpful."

She added Molina's musical theater workshop was helpful as well as Molina chose a few videos of students singing to give them feedback on their performance.

"I was super surprised when she played my video, but I loved the feedback she gave," Catella said. "It helped me reconsider how I perform musical theater songs."

All of the students who competed for Thespys received Excellent and Superior ratings.

Of the $15,101,380 of scholarships offered, students from CHS Troupe 803 received $658,000 of the offers. Colby, Stewart, Chloe Chiappelli and Quinton Muhleck received offers from two to nine universities and colleges.

"I could not be prouder of the group of thespians that competed in scholarships and Thespys this year. We are a small but mighty troupe," Tisler said. "I also had a great experience by receiving all of the love and support from my troupe and seeing everyone cheer each other on as our Thespy and Scholarship results came in. I competed for the first time in a Thespy event. I did the Stage Management event and earned a Superior."

Tisler is a senior and plans to major in engineering when she goes to college.

"I am hoping to stay involved in the arts in any way that I can," she said.

Catella hopes to be able to audition for high school productions in 2021. But mostly, she hopes that theater everywhere is back in 2021 for everyone.

"I have never gone a year without doing a musical for the past five years, so this year has been kind of weird as I'm sure it has been for everyone whose extracurriculars and hobbies have been canceled this year," she said. "My hope is theater can start up again in high schools everywhere so people can keep doing what they love. I also hope theater starts up again on Broadway because many actors, stage managers, technical crew workers, ushers, and everyone involved in theater are out of a job right now."